Drake is known for his chart-topping music and iconic fashion sense, but did you know he also boasts one of the most impressive jewelry collections in the world? From diamond-encrusted watches and chains to custom-designed pieces, Drake's jewelry collection is truly unparalleled.

Drake is known for his extravagant taste in jewelry, but his latest acquisition may just take the cake. In March 2022, the rapper was spotted at a Toronto Raptors v Los Angeles Lakers game wearing a truly one-of-a-kind necklace from luxury brand Homer, owned by fellow artist Frank Ocean. The necklace, valued at a staggering $1.9 million, is made up of 9,226 white gold orb diamonds with a spherical legs pendant in the center. 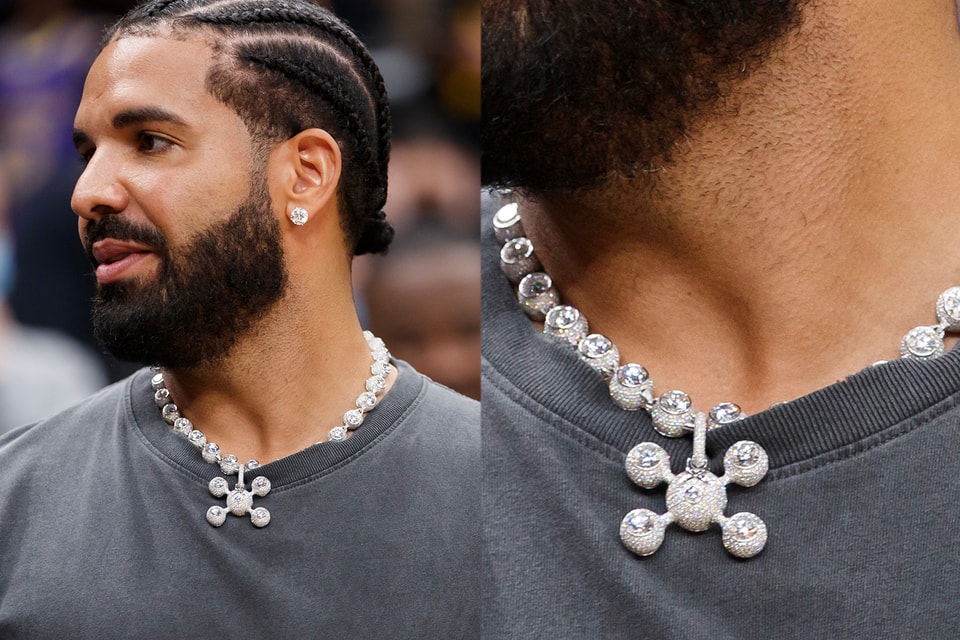 This isn't the first time the necklace has made an appearance on the red carpet, as Frank Ocean himself also wore it to the 2021 Met Gala. The necklace is a true statement piece and it's not hard to see why Drake was so drawn to it. The 127.5-carat diamond necklace is a testament to the level of luxury and exclusivity that Homer is known for.

Drake's love for luxury jewelry is well-documented, and this Homer necklace is just the latest addition to his impressive collection. From diamond-encrusted watches and chains to custom-designed pieces, Drake's jewelry collection is truly unparalleled. This Homer necklace is a true showstopper and is sure to turn heads whenever Drake chooses to wear it.

Drake is known for his love of luxury fashion, and one of his favorite brands is none other than Italian luxury brand Stone Island. He's often seen wearing pieces from the designer, making him one of the brand's most famous fans. But in 2017, Drake took his love for Stone Island to the next level with a custom piece of jewelry. 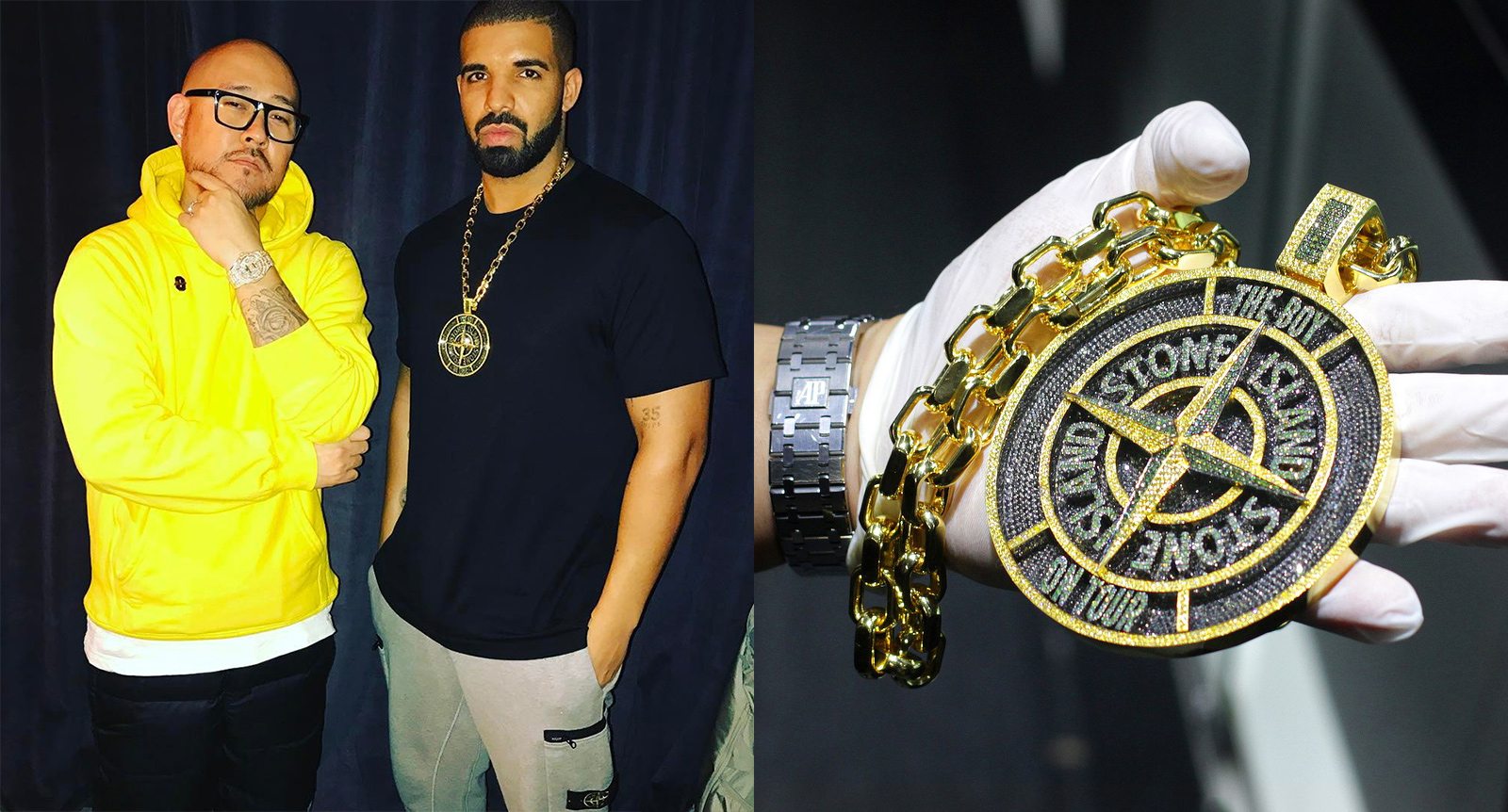 The rapper enlisted the help of renowned jeweler Ben Baller to create a one-of-a-kind gold and diamond-encrusted Stone Island logo chain. The chain, worth a whopping $100,000, is a true statement piece, featuring 880 grams of green, black, and yellow diamonds. The intricate design showcases the iconic Stone Island logo in a unique and luxurious way. 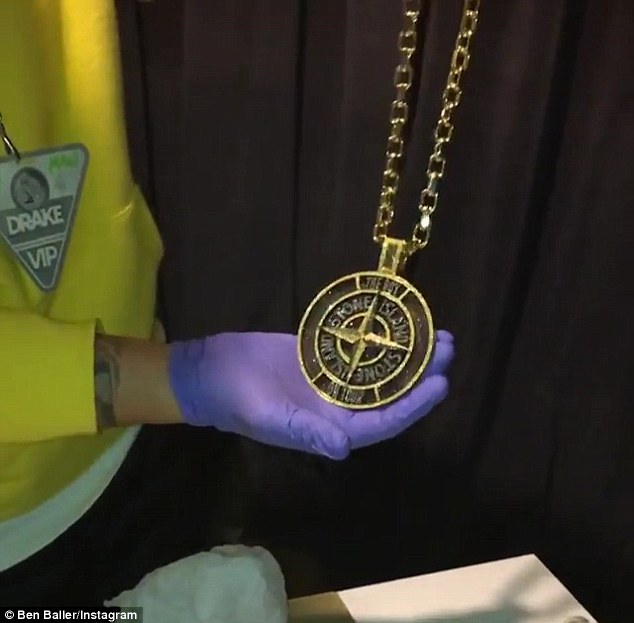 Drake has been a fan of Stone Island for many years and the pendant is a true reflection of his love for the brand. The combination of luxury and streetwear style is something that Drake has consistently embodied in his personal style. This pendant is a perfect representation of that.

This necklace made its debut on Instagram in 2016, when Drake uploaded a photo with Channing Tatum, captioning it "OVO x Magic Mike" . The necklace features a massive 'O' pendant, encrusted with diamonds from every direction. The O represents the OVO (October's Very Own) which is a record label and lifestyle brand founded by Drake. The O Necklace is possibly one of the largest pieces in Drake's collection, and it's clear to see why he was drawn to it. The necklace is not only a statement piece but also a symbol of his brand. The diamonds used on the necklace are of the highest quality and adds a touch of luxury to any outfit.

Drake purchased the necklace when his fourth studio album, Views, dropped in April 2016. The album was a commercial success, and the necklace was a perfect representation of his success and the launch of his album. The necklace is a great addition to Drake's jewelry collection and is a true reflection of his love for luxury. 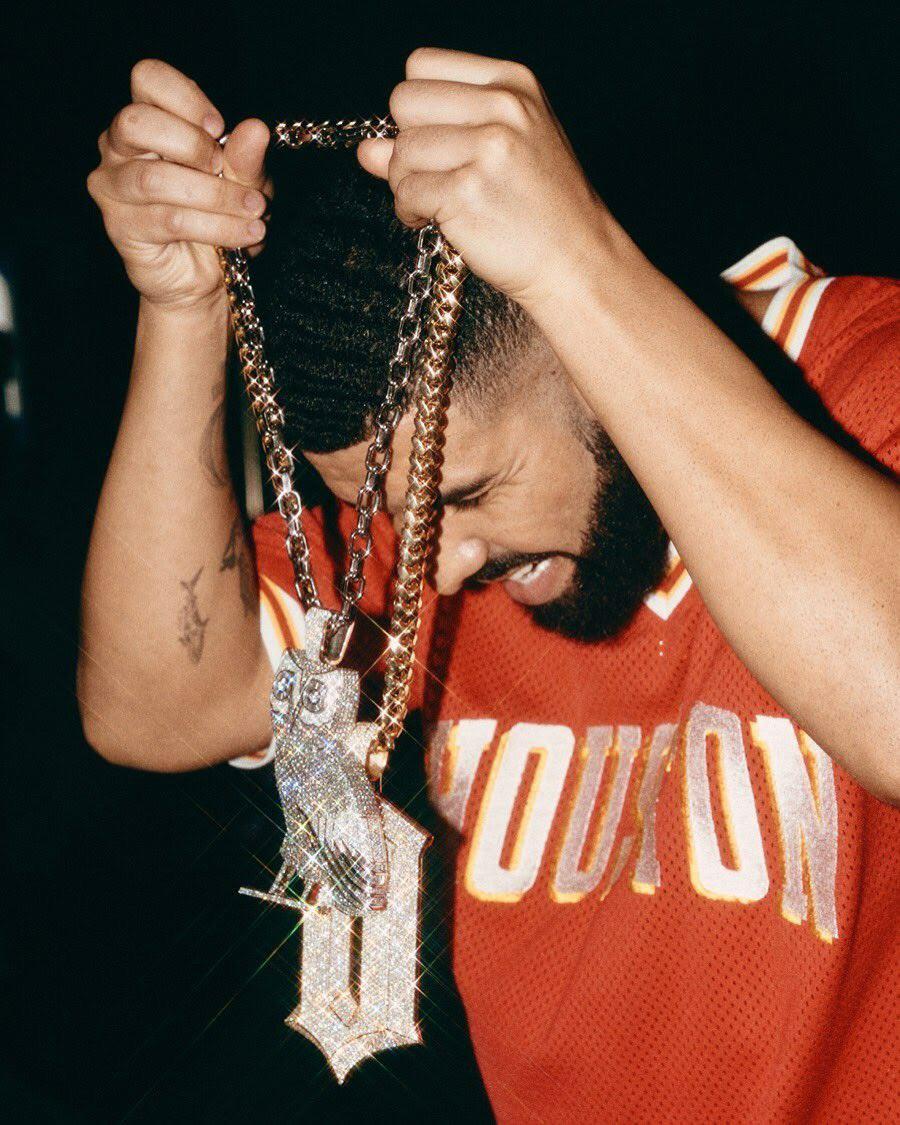 In 2018, Drake reached out to renowned jewelry designer Jason Arasheben with a special project in mind. He wanted a custom chain with an owl pendant, a symbol of his record label October's Very Own (OVO).

It took six weeks for Arasheben to create the custom chain, using 100-carat Asscher-cut diamonds. The chain was delivered to Drake in a diamond cage holding the unique owl pendant. Drake is often seen wearing the necklace around his neck, and it has become a staple in his jewelry collection. 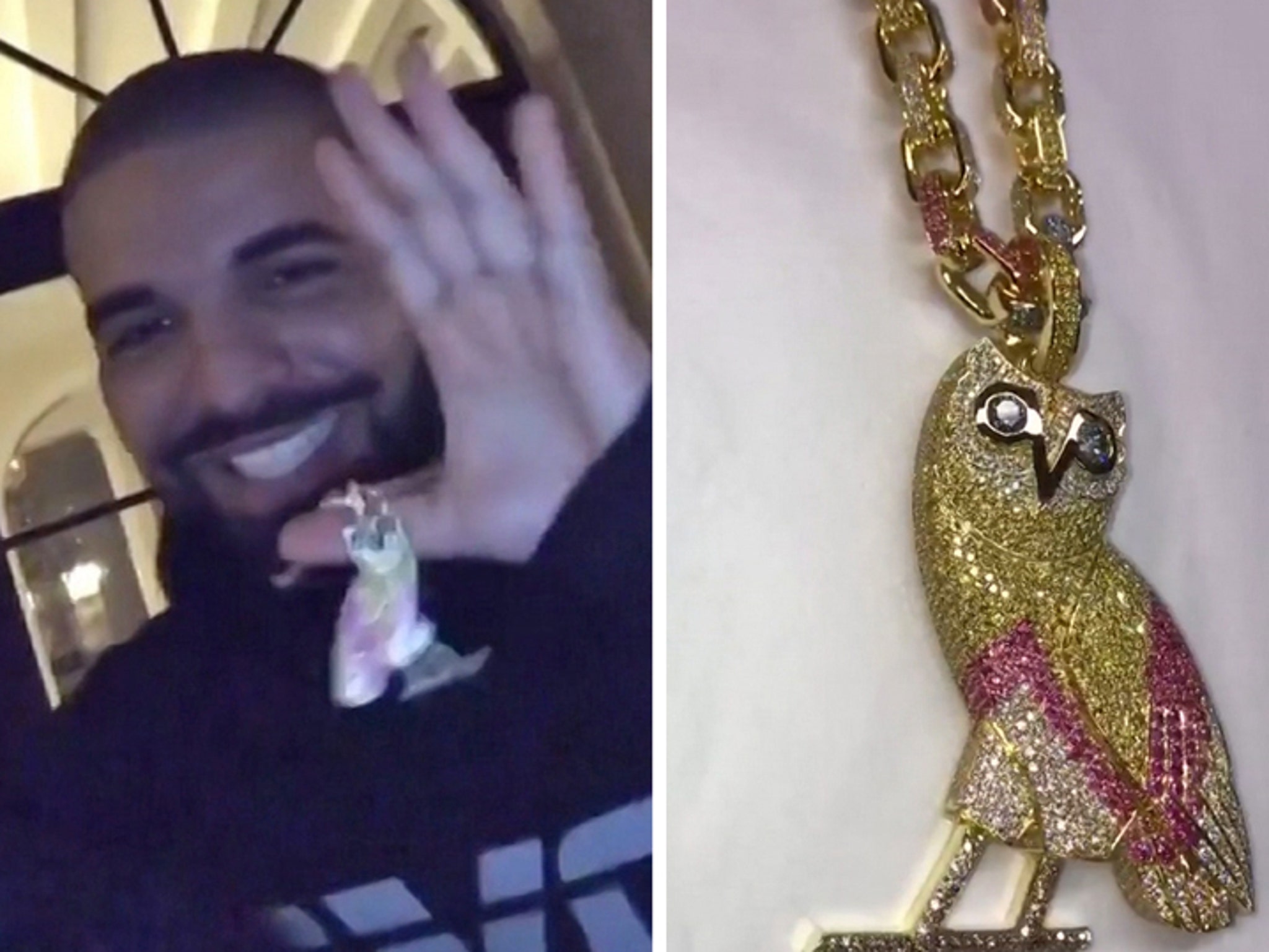 The OVO Owl Necklace is not only a statement piece but also a symbol of Drake's brand. The Asscher-cut diamonds used on the necklace are of the highest quality and add a touch of luxury to any outfit. The necklace is a perfect representation of Drake's success.

The custom chain and the unique owl pendant are a perfect combination and it's easy to see why Drake was so drawn to it. The necklace is a great addition to 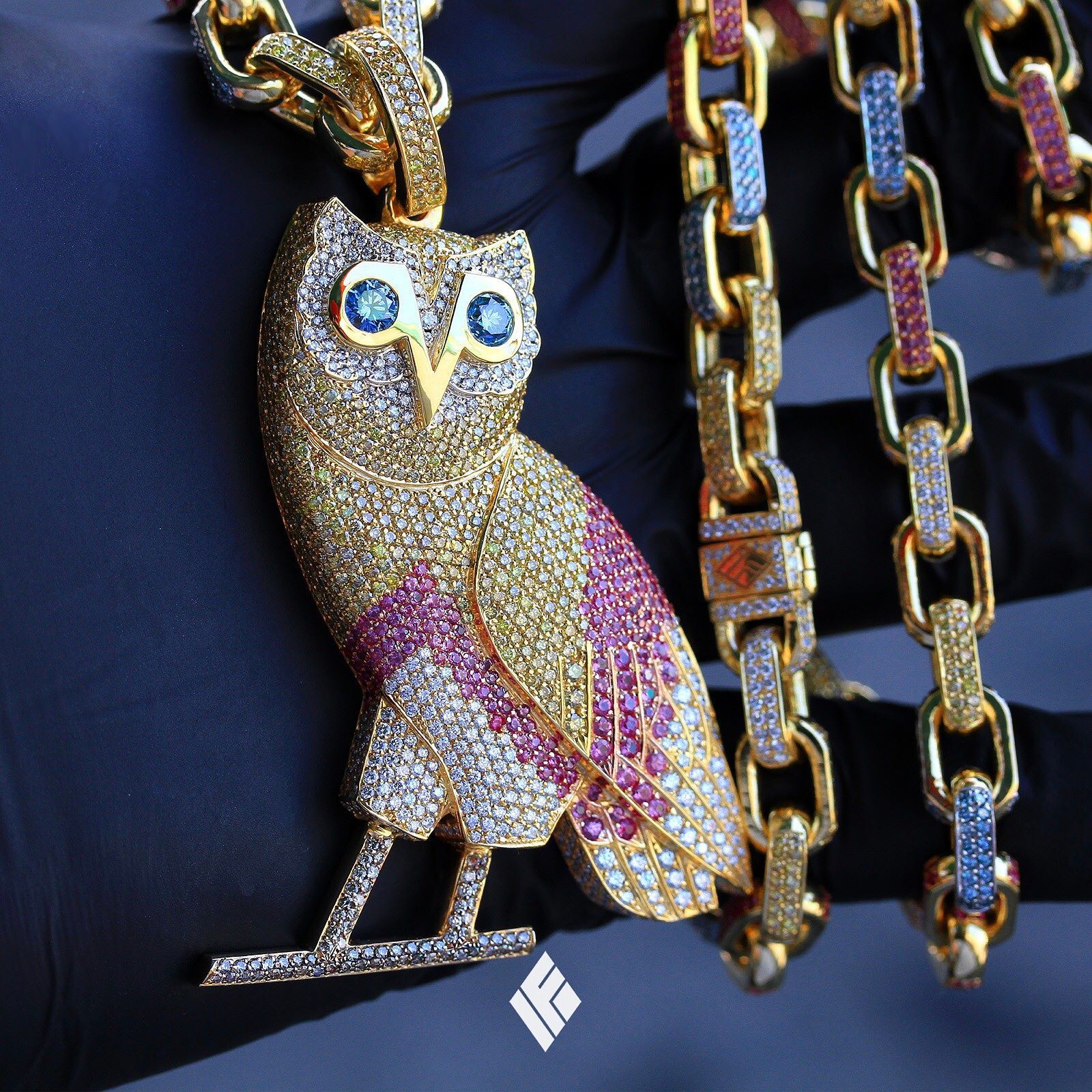 The Cartier Love Bracelet is a popular piece of jewelry among celebrities, and Drake is no exception. He owns the bracelet in multiple variations, including white gold, yellow gold, and diamond versions.

The iconic design was first introduced by Cartier in 1979 and has been worn by many famous people throughout the years, including Elizabeth Taylor. Drake was first spotted wearing the bracelet in 2018 and it has since become a regular accessory for him at events. 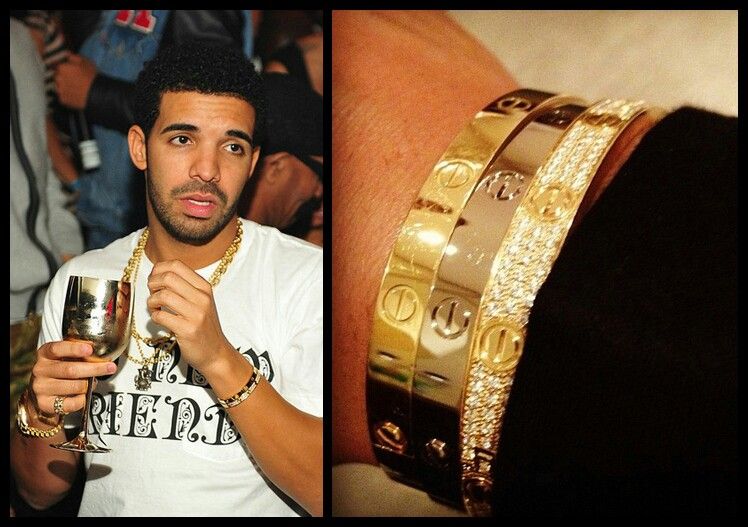 Drake is well-known as the ambassador and spokesperson for his hometown NBA team, the Toronto Raptors. So, it's no surprise that he was given a custom championship ring to commemorate the team's 2018-19 championship win.

Drake first unveiled the ring on his Instagram account, showing off the large and flashy design. The ring was adorned with 16 rubies and 650 diamonds to represent the playoff victories until the final, as stated by Complex.

The custom ring was made by Jason of Beverly Hills, a luxury jewelry designer and it came with 30-carat diamonds. The ring is a symbol of the team's historic win and Drake's close association with the team, and he often wears it to show his support to the team. 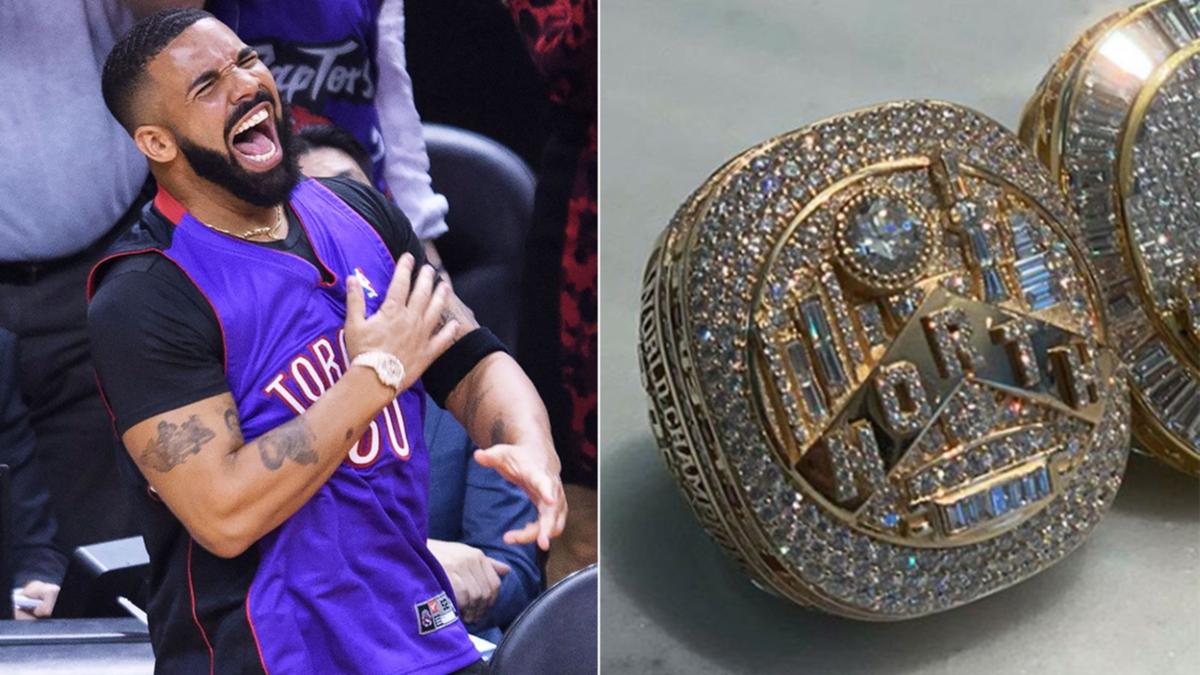 Drake's 35th birthday was a grand celebration, and among the many gifts he received from his famous friends, one that stood out was a necklace gifted by Young Thug. According to HypeBeast, the necklace was customized by Eliantte, a luxury jewelry designer. 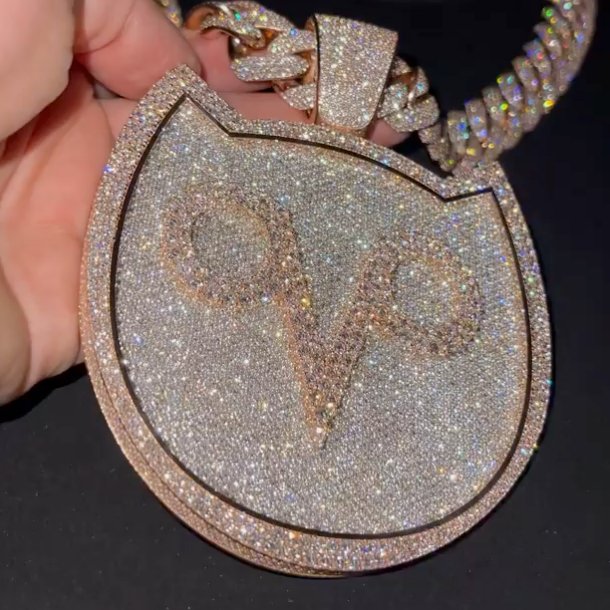 The pendant is quite substantial and features the OVO logo covered in diamonds from all directions. The back of the pendant features a photo of Drake and his son Adonis from the 2021 Billboard Music Awards, with Adonis' name carved into stones.

It's a sentimental and unique piece of jewelry, that Drake often wear it in public events and photos. The necklace is a mix of luxury and personal touch, making it one of Drake's most prized possessions.

Two years before receiving the Adonis Necklace, Drake was gifted another diamond-encrusted necklace, this time by Lil Wayne. The necklace was designed and created by Eliantte, a luxury jewelry designer. The necklace features a large pendant with the number '6', which is a reference to Drake's song "6ix God". 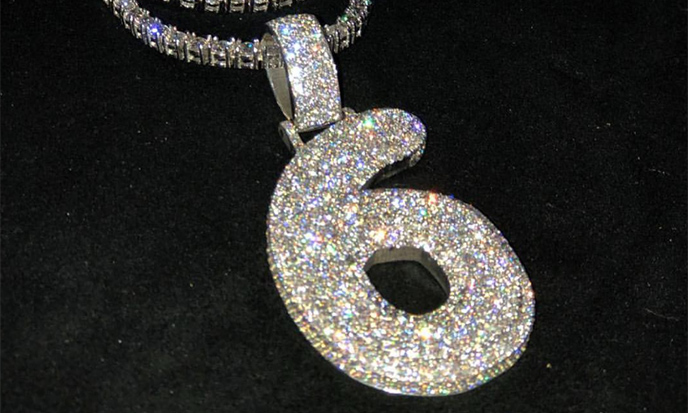 This number holds a significant meaning to Drake as it is the area code for Toronto, the city where he's from, and he often refers to himself as the self-proclaimed god of the rap scene in Toronto. This necklace is another example of Drake's love for jewelry that holds personal significance to him, and he often wears it in public events and photos.

Drake is known for his love of luxury jewelry, and one of his most extravagant pieces is a custom heart necklace from Gemma Fine Jewelry. The necklace was purchased in 2020 for a reported $1 million and was made from 22-carat heart-shaped diamonds.

The necklace is a long chain, and the process of creating it was intricate and required a lot of time. It took seven months for the necklace to be made to perfection. 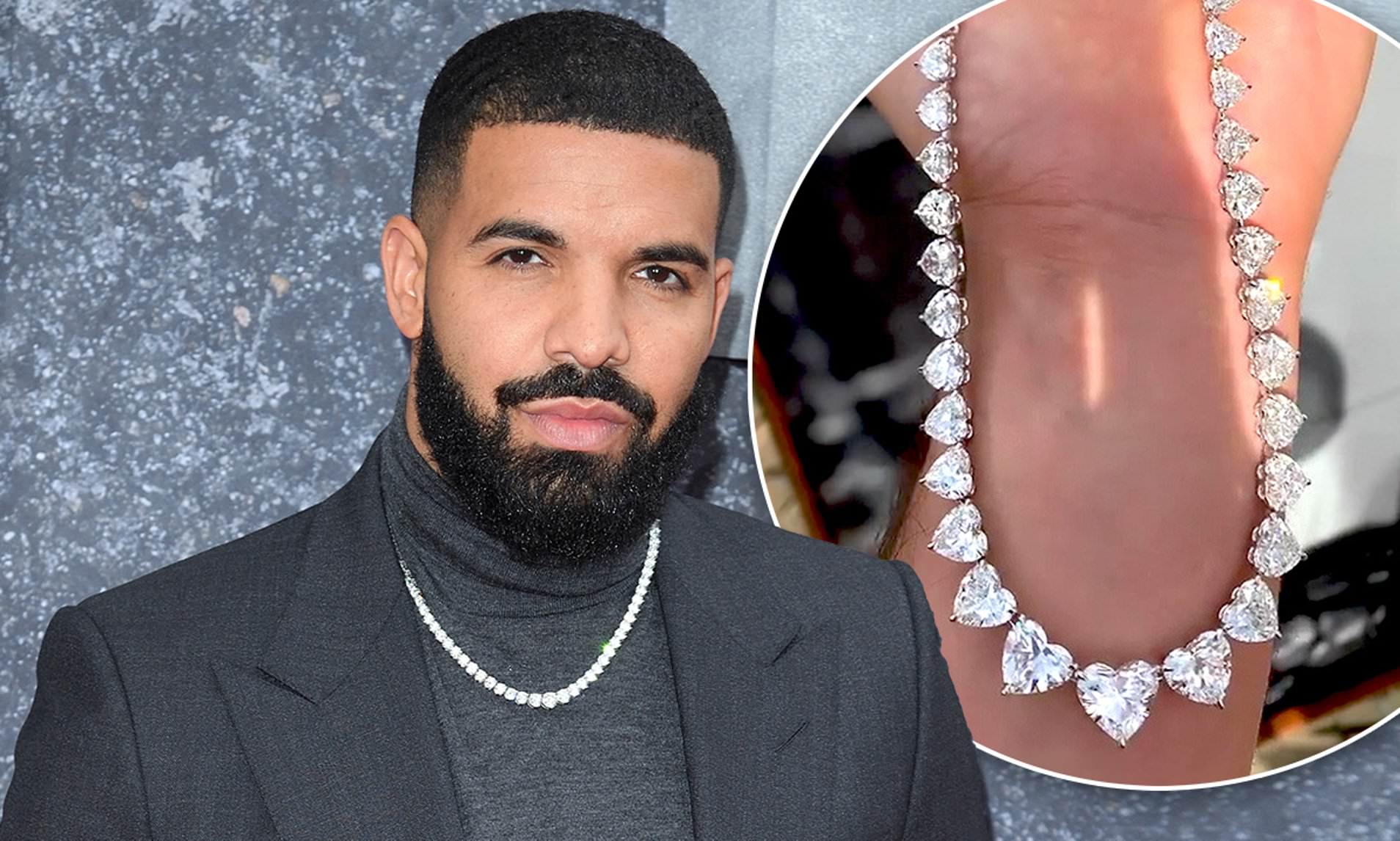 The necklace is a true display of luxury and craftsmanship, and Drake often wears it to red carpet events and in public appearances. It's a testament to Drake's love for jewelry that is not only beautiful but also holds personal significance to him.

Drake's Ski Mask Cupid chain is one of the most recognizable and iconic pieces of jewelry in the rapper's collection. The pendant is a custom-made design, featuring a ski mask with Cupid's wings, symbolizing the love and passion that Drake has for his music and his fans. The ski mask is a reference to his stage name, "Drake" which is inspired by the character "Drake" from the popular TV series "Degrassi: The Next Generation" in which he played the role of Jimmy Brooks.

The pendant is made with 75 carats of pure diamonds, encrusted all over the ski mask and wings. The diamonds are of high quality and are set in 18k gold, adding to the luxurious feel of the piece. The pendant itself is made with over half a kilo of pure gold, making it a heavy and substantial piece of jewelry. The chain that the pendant hangs from is also made of 18k gold, adding to the overall value of the piece. The chain is thick and sturdy, able to hold the weight of the pendant without any issues. The chain is also adjustable, allowing Drake to wear it at different lengths depending on his outfit or personal preference.

The Ski Mask Cupid chain is a true statement piece and is a reflection of Drake's personal style and taste. It is a symbol of his success and status as one of the most successful and influential rappers of our time. The chain has been spotted on Drake at multiple events and has become one of his signature accessories. The estimated value of the chain is around $300,000, making it one of the most expensive pieces of jewelry that Drake owns.

In conclusion, Drake's jewelry collection is truly one of a kind. From the $1.9 million Homer necklace to the custom-designed Stone Island pendant, each piece showcases the rapper's love for luxury and exclusivity.

Whether you're a fan of his music or simply appreciate the finer things in life, Drake's jewelry collection is a true testament to the level of luxury and style. And if you want to buy some exclusive jewelry like Drake, you can check out ICED UP LONDON, they will give you the best deal with the best quality. Our high-quality jewelry is crafted with attention to detail, ensuring you get a product that is sure to make an unforgettable statement.

Shop now and get ready to turn heads!

Don't forget to use the code ICEDOUT10 for an extra 10% off your purchase.

Come buy iced out jewelry from our online shop today!